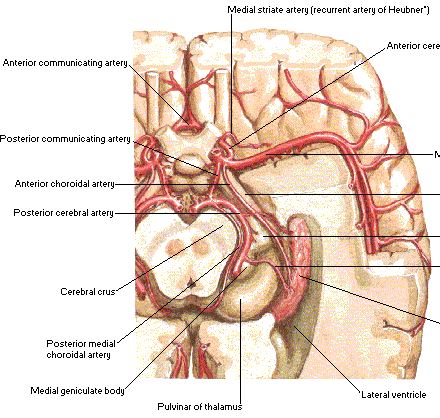 Anatomically, the cisternal segment of the AChA originates from the posterolateral wall of the internal carotid artery (ICA), runs along the lateral recess of the basal cistern, attaches itself to the optic tract, which is follows to reach the crural cisternbefore entering the choroidal fissure.
Microdissection of 100 hemispheres from human cadavers were performed in order to study the anatomic characteristics of the anterior choroidal artery (AChA). One AChA per hemisphere was found. In 98% of hemispheres the AChA arose from the internal carotid artery (ACI) 2.4mm distal to the origin of the posterior communicating artery (ACoP) and 4.7mm proximal to the carotid bifurcation. One or more perforating branches arose from communicating segment of ACI in 29% of hemispheres. The average calibre of the cisternal portion was 0.9mm and the plexal portion 0.7mm. The most frequent branches of the cisternal portion pass to the optic tract, cerebral peduncle, uncus and lateral geniculate body. Anastomosis were found between branches of the AChA and posterior cerebral artery, ACoP, middle cerebral artery and ACI 1).

An ectopic origin was observed in 4% of cases. The intracisternal segment of the anterior choroidal a. forms a neurovascular bundle with the optic tract and basal v. Most of its intraparenchymatous branches arise from the cisternal segment, while branches supplying the optic tract, lateral geniculate body and thalamus arise from the intraplexual segment. Constant anastomoses exist with the vertebrobasilar system, specially the postero-lateral choroidal and posterior cerebral aa. 2).

Both parts of the cisternal segment of the AChA come into surgical view during surgeries for different pathologies in and around theperimesencephalic cisterns. However, attending to the artery’s genu and defining pre- and postoptic parts during surgery may help the surgeon locate the origin and eventual course of these perforators, and even estimate the terminal areas of supply of most of the perforating arteries. The proposed classification system os Tanriover et al. can prove helpful in planning any operative procedure along the crural cistern and may reduce the probability of inadvertent injury to perforating branches of the cisternal segment.
The cisternal segment of the AChA was divided into pre- and postoptic parts that meet at the artery’s genu, the most medial extension point of the cisternal segment where the artery makes an abrupt turn after passing under the optic tract. The preoptic part of the AChA extended from its origin at the inferomedial side of the internal carotid artery to the artery’s genu, which is commonly located just inferomedial to the initial part of the optic tract. The postoptic part coursed within the crural cistern and extended from the genu to the inferior choroidal point. The genu of the AChA was 8 mm medial to the artery’s origin and was located medial to the optic tract in 13% of the hemispheres. The postoptic part was longer than the preoptic part in all hemispheres and had more perforating arteries supplying critical deep structures (preoptic 3.4 per hemisphere vs postoptic 4.6 per hemisphere), and these results were statistically significant (p = 0.01). At the preoptic part, perforating arteries arose from the superolateral portion of the artery and coursed laterally; at the postoptic part, perforators arose from the inferomedial portion of the artery and coursed medially. Perforating arteries from both segments passed most commonly to the optic tract, followed by the anterior segment and apex of uncus in the preoptic part and the cerebral peduncle in the postoptic part. 3).

The full extent of the damage caused by occlusion of the anterior choroidal artery is not known. However, studies show that the interruption of blood flow from this vessel can result in hemiplegia on the contralateral (opposite) side of the body, contralateral hemihypoesthesia, and homonymous hemianopsia. These symptoms are thought to arise from ischemic damage to the posterior limb of the internal capsule, thalamus, and optic chiasm/optic tract. However, the posterior limb of the internal capsule also receives lenticulostriate arteries from the Middle Cerebral Artery, thus creating partially redundant supply.

Manage Cookie Consent
To provide the best experiences, we use technologies like cookies to store and/or access device information. Consenting to these technologies will allow us to process data such as browsing behavior or unique IDs on this site. Not consenting or withdrawing consent, may adversely affect certain features and functions.
Manage options Manage services Manage vendors Read more about these purposes
View preferences
{title} {title} {title}