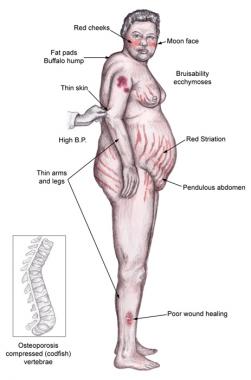 Cyclical Cushing’s syndrome may render the diagnosis and management of Cushing’s disease difficult.

It has been suspected that inhibition of a glucocorticoid positive feedback loop is associated with remission of hypercortisolism in ACTH-dependent cyclic Cushing’s syndrome. However, the underlying mechanism to trigger the development of its hypercortisolism is still unknown.

Thirty (14.9%; 26 females) patients had evidence of cyclicity/variability. ‘Cycling’ patients were older but no difference in sex or paediatric distribution was revealed between ‘cycling’ and ‘non-cycling’ patients. The median number of cycles was two for each patient, and 4 years was the median intercyclic period. A trend to lower cure rate post-neurosurgery and lower adenoma identification was observed in ‘cycling’ compared with ‘non-cycling’ patients. In multivariate analysis, older patients, longer follow-up, female sex and no histological identification of the adenoma were associated with an increased risk of cyclic disease.

This large population study reveals that cyclicity/variability is not an infrequent phenomenon in patients with Cushing’s disease, with a minimum prevalence of 15%. Physicians should be alert since it can lead to frequent problems in diagnosis and management, and no specific features can be used as markers 2).

A 56-year-old male patient with cyclic Cushing’s disease remained in a state of remission for more than one year with a relatively low dose of bromocriptine (2.5-3.75 mg/day). It has been reported that bromocriptine treatment for cyclic Cushing’s disease induces only a transient remission; in the most effective cases, a relatively high dose (40 mg/day) was necessary. In the hypercortisolemic state, plasma adrenocorticotropic hormone (ACTH) and serum cortisol were not suppressed by dexamethasone and did not respond to corticotropin-releasing factor (CRF). An antehypophysectomy was not effective, even though the resected tissue contained ACTH-positive microadenomas. The present observations thus indicate the effectiveness of bromocriptine for some patients with this rare disorder 3).

A cyclic excess of cortisol secretion was detected in a patient with diabetes insipidus and diabetes mellitus. The cycles of hypercortisolism were of 7 days’ duration, but during the nadir of these cycles urinary excretion of corticosteroids and 17-ketosteroids was within the normal range. The radiological appearance of the sella turcica was normal; however, computerized axial tomography of the head revealed a small tumor immediately superior to the sella turcica. At operation a small chromophobe adenoma superior to the diaphragma sellae and involving the hypophysial stalk was partially resected. Postoperatively, the patient continued to have 7-day cycles of increased corticosteroid excretion, but the amounts excreted were less than they had been preoperatively. Other patients have been described in whom Cushing’s disease has been due to cyclic hypercortisolism. These cycles have been remarkably regular in individual patients, but of variable duration in different patients. Furthermore, cyclic hormonogenesis probably occurs in a variety of endocrinopathies 4).