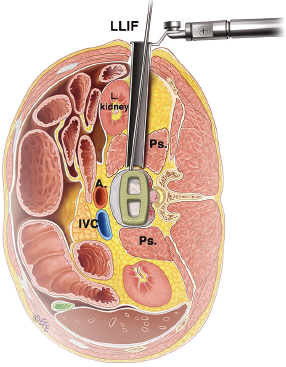 Since the first description of LLIF in 2006, the indications for LLIF have expanded and the rate of LLIF procedures performed in the USA has increased. LLIF has several theoretical advantages compared to other approaches including the preservation of the anterior and posterior annular/ligamentous structures, insertion of wide cages resting on the dense apophyseal ring bilaterally, and augmentation of disc height with indirect decompression of neural elements. Favorable long-term outcomes and a reduced risk of visceral/vascular injuries, incidental dural tears, and perioperative infections have been reported. However, approach-related complications such as motor and sensory deficits remain a concern. In well-indicated patients, LLIF can be a safe procedure used for a variety of indications 1).

Hijji et al. published a systematic review analyzing the complication profile of LLIF. Their study included a total of 63 articles and 6819 patients. The most commonly reported complications were transient neurologic injury (36.07%). The clinical significance of those transient findings, however, is unclear since the rate of persistent neurologic complications was much lower (3.98%) 2)

The risk of lumbar plexus injury is particularly concerning at the L4-5 disc space. Although LLIF is associated with an increased prevalence of anterior thigh/groin pain as well as motor and sensory deficits immediately after surgery, our results support that pain and neurologic deficits decrease over time. The level treated appears to be a risk factor for lumbosacral plexus injury 3).

Interestingly, the use of rhBMP-2 was associated with higher rates of persistent motor deficits, which might be explained by a direct deleterious effect of this agent on the lumbosacral plexus 4).

In a retrospective chart review of 118 patients, Cahill et al. determined the incidence of femoral nerve injury, which is considered one of the worst neurological complications after LLIF. The authors reported an approximate 5% femoral nerve injury rate of all the LLIF procedures performed at L4-5. There were no femoral nerve injuries at any other levels 5).

During a 6-year time period of performing LLIF Aichmair et al., noted a learning curve with a decreasing proportional trend for anterior thigh pain, sensory as well as motor deficits 6)

Le et al. also observed a learning curve with a significant reduction in the incidence of postoperative thigh numbness during a 3-year period (from 26.1 to 10.7%) 7).

Levi AD from the University of Miami Hospital, adopted an exclusive mini-open muscle-splitting approach in LLIF with first-look inspection of the lumbosacral plexus nerve elements taht may improve motor and sensory outcomes in general and the incidence of postoperative groin/thighsensory dysfunction and psoas-pattern weakness in particular 8).