In a video, Aldave et al., from the Division of Pediatric Neurosurgery, Texas Children’s Hospital, Department of Neurosurgery, Baylor College of Medicine, presented a case of a 6-yr-old girl with a large sellar-suprasellar craniopharyngioma.

The fact that the sphenoid was not pneumatized and the chiasm was elevated 1.2 cm from the planum sphenoidale were some of the reasons to choose a subfrontal infrachiasmatic approach as they discuss and show in the video. This approach has not been very well established in the literature but they demonstrated it can become a good alternative for a particular type of sellar-suprasellar tumors. Appropriate video authorization consent was obtained from the parent of the patient 1). 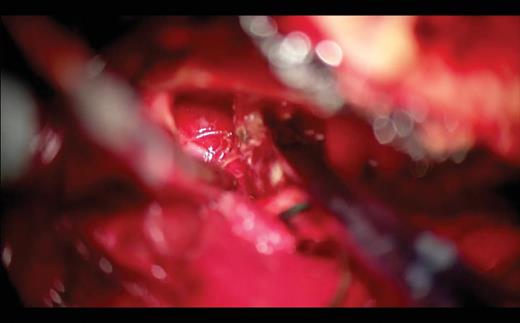 DNET-like neoplasms of the septum pellucidum

Chiang et al., collected 20 of these tumors for a comprehensive study of their clinical, radiological and pathological features. RNA sequencing or targeted DNA sequencing was undertaken on 18 tumors, and genome-wide DNA methylation profiling was possible with 11 tumors. Published cases (n=22) were also reviewed for comparative purposes.

The commonest presenting symptoms and signs were related to raised intracranial pressure; 40% of cases required cerebrospinal fluid diversion. Epilepsy was seen in approximately one third of cases. All patients had an indolent disease course, despite metastasis within the neuraxis in a few cases. Radiologically, the septum verum / septal nuclei were involved in all cases and are the proposed site of origin for septal DNET (sDNET). sDNET showed a high frequency (~80%) of PDGFRA mutations, and alterations in FGFR1 and NF1 were also identified. In a genomic DNA methylation analysis alongside other neural tumors, sDNETs formed a separate molecular group.

Genetic alterations that are different from those of cerebral DNETs and a distinct methylome profile support the proposal that sDNET is a distinct disease entity. 1).

Gessi et al., described the neuroradiologic, histopathologic, and molecular features of 7 cases (4 female and 3 male; patient age range, 3 to 34 y; mean age, 16.7 y). The tumors, all localized near the supratentorial midline structures in proximity to the foramen of Monro and septum pellucidum, appeared in magnetic resonance imaging as well-delimited cystic lesions with cerebrospinal fluid-like signal on T1-weighted and T2-weighted images, some of them with typical fluid-attenuated inversion recovery ring sign. Histologically, they shared features with classic cortical DNTs but did not display aspects of multinodularity. From a molecular point of view the cases investigated did not show KIAA1549-BRAF fusions or FGFR1 mutations, alterations otherwise observed in pilocytic astrocytomas, or MYB and MYBL1 alterations that have been identified in a large group of pediatric low-grade gliomas. Moreover, BRAF mutations, which so far represent the most common molecular alteration found in cortical DNTs, were absent in this group of rare periventricular tumors 2).

Baisden et al., reported a series of 10 low-grade neoplasms arising in the midline anteriorly in the region of the septum pellucidum with many of the histologic features of dysembryoplastic neuroepithelial tumor (DNT). The patients (five female, five male) ranged in age from 6 to 35 years (mean age, 21.5 years). The most common presenting symptoms were headache, nausea and vomiting, and visual disturbances. Radiographically, the tumors extended into the lateral ventricles from the septal region and obstructed the foramen of Monro. Varying degrees of hydrocephalus were present. The lesions were lobular, well-delineated, hypointense to brain on T1-weighted magnetic resonance imaging, and hyperintense on T2-weighted images. They were uniformly nonenhancing or showed only minimal peripheral enhancement. The tumors, in aggregate, had the histologic features of DNT. These included a mucin-rich background, oligodendrocyte-like cells, “floating neurons,” and a “specific glioneuronal element.” Seven patients underwent gross total resection and two underwent subtotal resection. No patients received adjuvant chemotherapy or radiotherapy. On follow-up (n = 6; median, 14 months), all tumors had either not recurred or were radiologically stable. On the basis of both neuroimaging and histopathology, DNT-like lesions should be considered in the differential diagnosis of midline intraventricular tumors in children and young adults. Distinction from more aggressive neoplasms is essential because these tumors appear to behave in a benign fashion 3).

The deliberate temporary degeneration of nerve fibers through the application of chemicals, heat or freezing, produces a block that may persist for weeks, months or indefinitely.

A neurolytic block is a form of nerve block involving the deliberate injury of a nerve by freezing or heating (“neurotomy”) or the application of chemicals (“neurolysis”).

These interventions cause degeneration of the nerve’s fibers and temporary (a few months, usually) interference with the transmission of nerve signals. In these procedures, the thin protective layer around the nerve fiber, the basal lamina, is preserved so that, as a damaged fiber regrows, it travels within its basal lamina tube and connects with the correct loose end, and function may be restored. Surgical cutting of a nerve (neurectomy), severs these basal lamina tubes, and without them to channel the regrowing fibers to their lost connections, over time a painful neuroma or deafferentation pain may develop. This is why the neurolytic is usually preferred over the surgical block.

Frequently, the term neuroablation is used to also describe the physical interruption of pain either chemically, thermally, or surgically. All neurolytic techniques cause Wallerian degeneration of the nerve axon distal to the lesion.

Chemicals were extensively utilized in the past for neurolysis in the early 20 century.

The first report of chemical neurolysis was made in 1863 by Luton who delivered irritant chemicals subcutaneously in patients with sciatica, offering them significant alleviation of pain. [Luton A, generales de medecin, 1863] The advent of newer and safer modalities have been introduced into pain practice including radiofrequency ablation (RFA), cryoablation, and neurosurgical procedures.

The advancements in imaging modalities such as fluoroscopy have improved the precision and efficiency of targeted neurolysis 1).