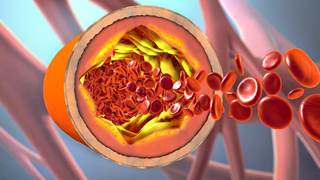 The aim of a study was to report the relationship between cognitive function and risk factors at baseline and during follow-up in the Stenting and Aggressive Medical Management for Preventing Recurrent stroke in Intracranial Stenosis (SAMMPRIS) trial.

Subjects in the SAMMPRIS trial were included in this study. In order to have an assessment of cognitive function independent of stroke, patients with a stroke as a qualifying event whose deficits included aphasia or neglect were excluded from these analyses as were those with a cerebrovascular event during follow-up. The Montreal Cognitive Assessment (MoCA) score was used to assess cognitive impairment at baseline, 4 months, 12 months and closeout. Cognitive impairment was defined as MoCA < 26. A multivariate analysis was performed to determine what risk factors were independent predictors of cognitive function at baseline, 12 months and closeout. Among patients randomized to aggressive medical management only, the percentage of patients with cognitive impairment was compared between patients in versus out of target for each risk factor at 12 months and closeout.

Adult Sprague-Dawly rats were under filtered air (FA) or PM2.5 exposure with NCD or HCD for 6 or 12 weeks. Half of the HCD rats were treated with O3FA (5 mg/kg/day) by gavage. A total of 600 mg NG-nitro-L-arginine methyl ester (L-NAME, 3 mg/mL) per rat was administered over two weeks as supplementation in the HCD group. Blood lipids, including LDL, CHO, TG and high density lipoprotein (HDL), were measured at 6 and 12 weeks. ICA was determined by lumen diameter and thickness of the MCA. Inflammatory markers, IL-6, TNF-α, MCP-1, IFN-γ, VCAM-1 and iNOS were assessed by real-time PCR for mRNA and Western blot for protein expression 2).