Spinal schwannoma are most frequently seen in the cervical and lumbar regions, far more frequently than in the thoracic spine. 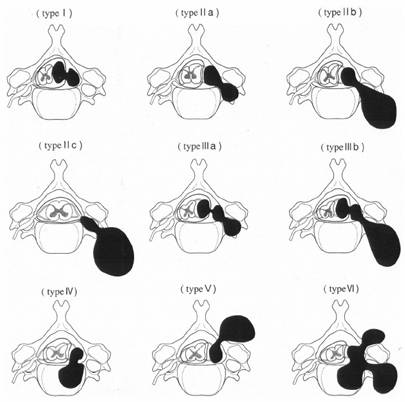 Eden’s classification for dumbbell tumors of the spine, long considered a “gold standard,”

no longer is sufficient to determine surgical strategy in view of recent advances in computed tomography and magnetic resonance imaging.

Cervical dumbbell spinal schwannomas with an extraspinal extension through the intervertebral foramina pose significant challenges for complete resection while avoiding injury to the vertebral artery and preserving the integrity of the cervical spine. Posterior approaches may require an extensive soft-tissue dissection and bone removal with potential spinal instability. Moreover, they offer only a limited access to an extraspinal tumor component that entails an additional anterior approach for complete resection of a dumbbell-shaped lesion.

Goga et al., used an anterolateral transforaminal approach that preserves the bony elements of the intervertebral foramen and offers a comprehensive access to the extraspinal, foraminal and intraspinal/intradural components of a cervical dumbbell tumor 2).

Cervical spinal schwannoma is benign, and outcomes after surgical resection are generally excellent. A surgical dilemma sometimes arises as to whether to perform total tumor removal, which carries a risk of sacrificing the nerve root, or subtotal removal, where the risk can be tumor recurrence.

Average follow up was 31.5 months. The mean age of the series was 35.8 years (range 10-61 years). There were 8 male and 7 female patients. The mean duration of symptoms at the time of presentation was 32 months (range 06 months-5 years). Two schwannomas were completely extradural, seven were intradural and rest six were interdural or hourglass type (both extra and intradural) as identified during surgery. The standard midline posterior approach was used in all patients. A C2 hemilaminectomyor C2 laminectomy with or without cutting of posterior arch of atlas was used for most intradural and large interdural C2 schwannomas. Tumor removal was complete in all cases. Preservation of the nerve root fibers was not possible in 9 cases and was possible only in 3 cases. In two patients CSF leak developed after operation. One patient who had severe myelopathic features with bed sore failed toimprove and expired 5 months after operation. Rest of the patients showed postoperative improvement in their preoperative symptoms and returned to their normal life by the end of sixth month. There was no tumor recurrence in any patient till last follow up.

Thirty cases of cervical schwannomas treated by Yamane et al. were retrospectively reviewed;initial symptoms, tumor location, Eden classification, surgical method, functional outcome, and tumor recurrence were investigated. All permanent motor deficits were the result of resecting functionally relevant nerve roots (i.e., C5-8). The rate of permanent sensory deficit was 11% after C1-4 nerve root resection, and 67% after C5-8 nerve root resection. Permanent neurological deficits occurred in 14% of patients younger than 40 years and 38% of those older than 40. Dumbbell tumors were associated with the need for total or ventral nerve root transection, as well as with a high incidence of tumor recurrence. The incidence of permanent neurological deficit was significantly higher in patients undergoing C5-8 nerve root resection, and tended to be higher in those over 40 4).

To establish optimal surgical strategies, we considered shapes and three-dimensional locations of cervical dumbbell tumors based on diagnostic images and intraoperative findings.

Forty-two cervical dumbbell tumors were characterized according to transverse-section images (Toyama classification; nine types) and craniocaudal extent of intervertebral and transverse foraminal involvement (IF and TF staging; three stages each).