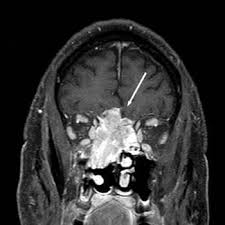 Believed to arise from the olfactory neural crest cells in the upper nares, it is considered to be malignant. These tumors occur over a wide age range (3 to 90 years), with a bimodal peak between the second and third decade and a second peak in the sixth and seventh decades.

These tumors typically present with unilateral nasal obstruction and epistaxis.

Diagnosis is confirmed on biopsy.

MRI: isointense with the brain on T1-weighted imaging and intermediate to high signal intensity on T2- weighted imaging and enhance heterogeneously with gadolinium. Signal characteristics may mimic meningioma. For higher stage lesions, the cribriform plate may be eroded; better seen on thin-cut CT. The most important factor determining resectability is an intracranial extension. Magnetic resonance aids in the distinction between extradural tumors, dural invasion, or parenchymal brain invasion. None of these are specific to this tumor.