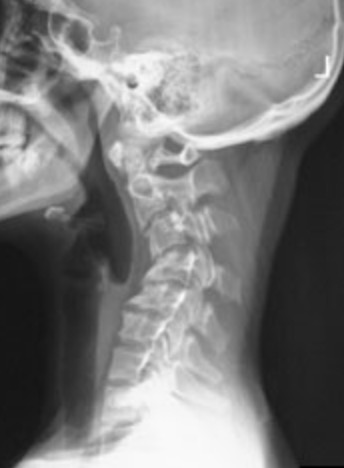 Cervical kyphotic deformity, its a cervical spine deformity with a loss of curve in the neck compared to the natural lordosis.

These conditions appear as a curvature of the neck and are neck deformities that cause neck pain and instability.

Patients with cervical kyphotic deformity exhibit different patterns of reciprocal changes depending on whether they have head-balanced or trunk-balanced kyphosis. These reciprocal changes should be considered to in order to prevent secondary spine disorders. It is important to evaluate the global spinal alignment to assess postoperative changes 1)

Cervical kyphosis can be classified into two different groups:

The treatment option for correcting a cervical kyphotic deformity is currently controversial. Lots of studies examined the one/stage combined anterior-posterior treatment, although the rate of fusion and the long term follow up controls are rarely mentioned in the literature 2) 3) 4) 5) 6) 7) 8).

A prospective study analysed possible risk factors leading to cage subsidence with resulting sagittal malalignment of cervical spine. Radiographic data of 100 consecutive patients with compressive radiculo-/myelopathy due to degenerative disc prolapse or osteophyte formation were prospectively collected in those who were treated by anterior cervical discectomy and implantation of single type interbody fusion cage. One hundred and forty four implants were inserted altogether at one or two levels as stand-alone cervical spacers without any bone graft or graft substitute. All patients underwent standard anterior cervical discectomy and the interbody implants were placed under fluoroscopy guidance. Plain radiographs were obtained on postoperative days one and three to verify position of the implant. Clinical and radiographic follow-up data were obtained at 6 weeks, 3 and 6 months and than annually in outpatient clinic. Radiographs were evaluated with respect to existing subsidence of implants. Subsidence was defined as more than 2 mm reduction in segmental height due to implant migration into the adjacent end-plates. Groups of subsided and non-subsided implants were statistically compared with respect to spacer distance to the anterior rim of vertebral body, spacer versus end-plate surface ratio, amount of bone removed from adjacent vertebral bodies during decompression and pre- versus immediate postoperative intervertebral space height ratio. There were 18 (18%) patients with 19 (13.2%) subsided cages in total. No patients experienced any symptoms. At 2 years, there was no radiographic evidence of accelerated adjacent segment degeneration. All cases of subsidence occurred at the anterior portion of the implant: 17 cases into the inferior vertebra, 1 into the superior and 1 into both vertebral bodies. In most cases, the process of implant settling started during the perioperative period and its progression did not exceed three postoperative months. There was an 8.7 degrees average loss of segmental lordosis (measured by Cobb angle). Average distance of subsided intervertebral implants from anterior vertebral rim was found to be 2.59 mm, while that of non-subsided was only 0.82 mm (P < 0.001). Spacer versus end-plate surface ratio was significantly smaller in subsided implants (P < 0.001). Ratio of pre- and immediate postoperative height of the intervertebral space did not show significant difference between the two groups (i.e. subsided cages were not in overdistracted segments). Similarly, comparison of pre- and postoperative amount of bone mass in both adjacent vertebral bodies did not show a significant difference. Appropriate implant selection and placement appear to be the key factors influencing cage subsidence and secondary kyphotisation of box-shaped, stand-alone cages in anterior cervical discectomy and fusion. Mechanical support of the implant by cortical bone of the anterior osteophyte and maximal cage to end-plate surface ratio seem to be crucial in the prevention of postoperative loss of lordosis.

The results were not able to reflect the importance of end-plate integrity maintenance; the authors would, however, caution against mechanical end-plate damage. Intraoperative overdistraction was not shown to be a significant risk factor in this study. The significance of implant subsidence in acceleration of degenerative changes in adjacent segments remains to be evaluated during a longer follow-up 9).

There are several causes of cervical kyphosis. This condition can develop in children and adults.

The first cause is degenerative disc disease. The process of degeneration of the intervertebral discs causes many spine problems. In older adults, the wear and tear of aging on the discs between each vertebra can cause the disc to collapse. As the discs collapse and grow thinner, the head tilts forward and the neck begins to curve forward. This begins a process that may continue to progress for years. The weight of the head causes an imbalance of forces pushing the neck increasingly forward. This slowly leads to an increasing curve and may end with a kyphosis.

The second cause of cervical kyphosis is congenital, meaning it is a birth defect affecting the development of the spine. A person is born with some sort of defect, such as incomplete formation of the spine, which leads to an increasing kyphosis type curve in the neck. Congenital kyphosis usually leads to a growth disturbance of the vertebrae themselves. Instead of growing normally, the vertebrae grow into a triangular-shape with the small end pointing forward. Because the vertebrae are stacked one atop the other, the triangle shape causes the spine to have a forward curvature.

When a child has congenital kyphosis, there are generally additional birth defects in other areas of the body. Most commonly, there are defects of the kidneys and urinary system.

Treatment for congenital kyphosis is typically surgery. Early surgical intervention usually produces the best results and can prevent progression of the curve. The type of surgical procedure will depend on the nature of the abnormality. Conservative (non-surgical) treatment plans do not have much success at correcting this type of kyphosis. Without surgery, there is a critical need for observation and close medical follow-up to prevent serious problems.

The third cause of cervical kyphosis is traumatic, meaning it is the result of an injury to the cervical spine. This may be from a compression fracture of the vertebrae or from an injury to the ligaments in the back of the cervical spine. When a compression fracture of the vertebra occurs, the vertebral body may heal in a wedge shape. This causes a similar situation discussed above for the triangle-shaped vertebrae of a congenital kyphosis. The resulting imbalance can lead to increasing forward curvature of the neck. If the kyphosis becomes bad enough, it can narrow the spinal canal causing a condition known as spinal stenosis. Pressure on the spinal cord due to the narrowing can lead to neurological problems, such as pain, numbness, and a loss in muscle strength.

The fourth, and the most common cause of cervical kyphosis, is iatrogenic. Iatrogenic means the problem results from the effects of a medical treatment, such as surgery. Kyphosis following laminectomy surgery is quite common. It happens much more frequently with children than with adults.

The symptoms of cervical kyphosis can range from a simple nuisance to a severe deformity, which can lead to paralysis if untreated. Symptoms can include mechanical neck pain if the kyphosis is due to degenerative changes in the cervical spine. You may have a reduced range of motion in the neck. This means you may not be able to rotate your neck fully and you may have difficulty looking up for any length of time.

If the kyphosis is severe, you may begin to have problems with the nerve roots or the spinal cord, due to pressure on the nerves in the cervical spine. This may cause: weakness in the arms or legs, loss of grip strength, or difficulty walking due to spasticity in the legs. You may have problems controlling your bladder or bowels. In extremely severe cases that are left untreated, paralysis from the neck down may even result.

Regular X-rays, are usually a first step in looking into any neck problem and will help determine if more tests will be needed.

The MRI is the most commonly used test to evaluate the spine because it can show abnormal areas of the soft tissues around the spine. The MRI is better than X-ray because in addition to the bones, it can also show pictures of the nerves and discs. The MRI is done to find tumors, herniated discs, or other soft-tissue disorders.

Excessive kyphosis can be treated, and the methods of treatment have evolved over time. Today, surgery to treat cervical kyphosis is usually a spinal fusion combined with “segmental instrumentation”. This means that some type of metal plate or rod is used to hold the spine in the proper alignment in order to straighten it.

If the deformity is fixed (meaning that it is not getting worse), and there are no neurological problems due to pressure on the spinal cord, surgery is usually not recommended because the problem is not going to get worse. Spinal surgery is serious, and unless necessary, it is rarely recommended. However, if the fixed deformity is accompanied by neurological problems from pressure on the spinal cord, surgery becomes more likely. Surgical correction is the most difficult type of treatment for cervical kyphosis. Surgery may require an operation from the front of the spine to relieve the pressure on the spinal cord, and an operation from the back to fuse the spine and prevent the kyphosis from returning.

If the kyphosis is flexible, the decision to go ahead with surgery should be based upon: the progression of the deformity, the severity of the deformity, and the amount of pain it causes. If the curve and pain are minor, surgery will not be recommended simply because the deformity looks bad. However, if the deformity is severe and the pain is chronic, surgery may be a good option.

If the kyphosis is due to ankylosing spondylitis, the problem area of the spine usually extends over the area where the cervical and thoracic spines join each other. This type of cervical kyphosis is usually a fixed deformity. Ankylosing spondylitis (AS) causes the discs between each vertebra of the entire spine to calcify and actually creates a fusion of the entire spine. If there is a cervical kyphosis after the spine fuses due to AS, the surgery may have to include performing an “osteotomy” of the fused spine. The term osteotomy means “bone (osteo) cut (otomy)”. During an osteotomy, the front of the spine column may need to be cut to allow the surgeon to straighten the spine. The spinal cord is not cut, only the bone of the vertebrae in the front of the spinal column.

Posterior laminoplasty might be considered as a treatment option for multilevel cervical degenerative disc diseases (MCDDs) but could not be appropriate for patients with cervical kyphotic deformity 10).