Anatomic diversity among cerebellar arteriovenous malformations (AVMs) calls for a classification that is intuitive and surgically informative. Selection tools like the Spetzler-Martin grading system are designed to work best with cerebral AVMs but have shortcomings with cerebellar AVMs 1)

The objective of a study from the Department of Neurosurgery, University of California, San Francisco, Banner-University Medical Center Tucson, Arizona and Barrow Neurological Institute, Phoenix, was to evaluate the existing Spetzler-Martin AVM grading system (SM), Spetzler Ponce classification (SP), and Lawton-Young Grading System (LY) for cerebellar arteriovenous malformations (AVMs) and to propose a new grading system to estimate the risks associated with these lesions.

A total of 125 cerebellar AVMs of 1328 brain AVMs were reviewed in 125 patients, 120 of which were treated microsurgically and included in the study. With our proposed grading system, we found poor outcomes differed significantly between each grade (p < 0.001), while with the SM, SP, and LY grading systems they did not (p = 0.22, p = 0.25, and p = 1, respectively). Logistic regression revealed grade 2 had 3.3 times the risk of experiencing a poor outcome (p = 0.008), while grade 3 had 9.9 times the risk (p < 0.001). The proposed grading system demonstrated a superior level of predictive accuracy (area under the receiver operating characteristic curve [AUROC] of 0.72) compared with the SM, SP, and LY grading systems (AUROC of 0.61, 0.57, and 0.51, respectively).

Nisson et al., propose a novel grading system for cerebellar AVMs based on emergency surgery, venous drainage, preoperative neurological status, and age that provides a superior prognostication power than the formerly proposed SM, SP, and LY grading systems. This grading system is clinically predictive of patient outcomes and can be used to better guide vascular neurosurgeons in clinical decision-making 2).

Rodriguez-Hernandez et al. hypothesized that the predictive capability of the supplementary grading scale was superior to that of the Spetzler Martin grading scale for assessment of outcomes following microsurgical resection of cerebellar AVMs 3).

Deep venous drainage is a better indicator of the depth of the nidus for cerebral AVMs than for cerebellar AVMs. Cerebellar anatomy is altered by AVMs in a different manner than cerebral anatomy such that the supplementary grading scale may be better than the Spetzler-Martin grade for prediction of surgical outcomes. In comparison with ruptured cerebral AVMs, which may be managed conservatively followed by radiosurgery for achievement of obliteration, ruptured cerebellar AVMs may be better treated by surgical resection, especially when the associated hemorrhage results in symptomatic compression of surrounding neural structures.

In conclusion, the surgical risk for cerebellar AVMs may be predicted by either the Spetzler-Martin or supplementary grading scales, although the supplementary scale may show better correlation with outcomes 4) 5) 6). However, neither grading system can substitute for experienced clinical and surgical judgment 7). 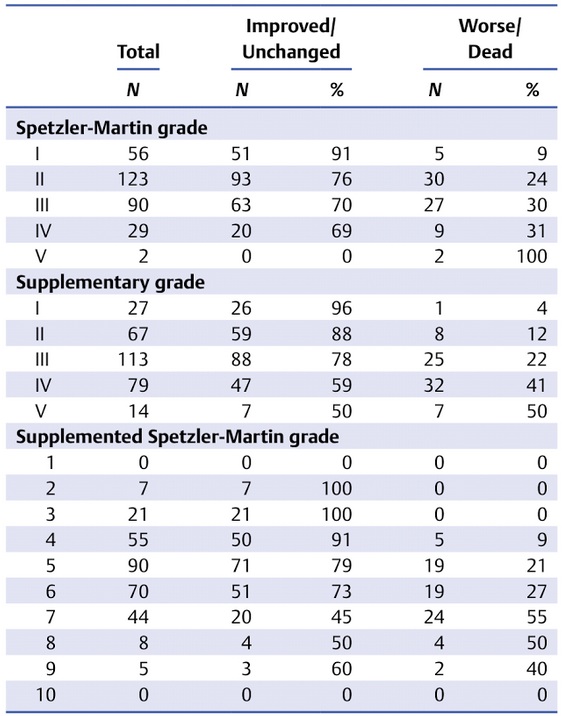 A retrospective study was conducted on 200 patients admitted to the Helsinki University Hospital between 2000 and 2014. The validity of the Supp-SM and SM grading systems was compared using the area under the receiver operating characteristic (AUROC) curves, with respect to the change between preoperative and early (3-4 mo) as well as final postoperative modified Rankin Scale (mRS) scores.

The Supp-SM grading system improves the outcome prediction accuracy and is a feasible alternative to the SMS, even for series with higher proportion of high-grade AVMs. However, perforators play important role on the outcome 3).

Data collected from 1009 AVM patients who underwent AVM resection were used to compare predictive powers of Spetzler Martin grades (SM) and supplemented Spetzler-Martin grades (SM-Supp). Patients included the original 300 patients plus those treated thereafter (N=117), and an additional 592 patients from three other centers.

The study of Kim et al., validates the predictive accuracy of the supplementary grading system in a multicenter cohort. SM-Supp grade of 6 is a cut-off or boundary for AVM operability. Supplemented grading is currently the best method of estimating neurological outcomes after AVM surgery, and recommended as a starting point in the evaluation of AVM operability 4).