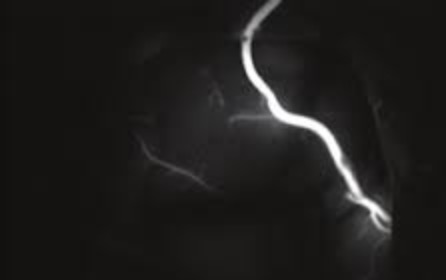 Indocyanine green videoangiography for intracranial aneurysm is applied in order to assess intra-operatively both aneurysm sac obliteration and vessel patency after clipping.

Although digital subtraction angiography (DSA) may be considered the gold standard for intraoperative vascular imaging, many neurosurgical centers rely only on indocyanine green videoangiography (ICG-VA) for the evaluation of clipping accuracy.

In a Systematic Review and Meta-Analysis of Riva et al., from Brussels, Leuven, Belgium, Monza, Italy and Chicago, Illinois because a proportion of mis-clippings cannot be identified with ICG-VA, this technique should still be considered complementary rather than a replacement to DSA during aneurysm surgery. Incorporating other intraoperative tools, such as flowmetry or electrophysiological monitoring, can obviate the need for intraoperative DSA for the identification of vessel stenosis. Nevertheless, DSA likely remains the best tool for the detection of aneurysm remnants 1).

Its a safe and effective modality of intraoperative blood flow assessment and reduces the incidence of postoperative ischaemic complications 2).

However, ICGV-derived data have been reported to be misleading at times. Della Puppa et al., noted that a simple intra-operative maneuver (the “squeezing maneuver”) allows the detection of deceptive ICGV data on aneurysm exclusion and allows potential clip repositioning. The “squeezing maneuver” is based on a gentle pinch of the dome of a clipped aneurysm when ICGV documents its apparent exclusion.

Data from 23 consecutive patients affected by intracranial aneurysms who underwent the “squeezing maneuver” were retrospectively analyzed. The clip was repositioned in all cases when the dyeing of the sac was visualized after the maneuver.

In 22% of patients, after an initial ICGV showing the aneurysm exclusion after clipping, the squeezing maneuver caused the prompt dyeing of the sac; in all cases the clip was consequently repositioned. A calcification/atheroma of the wall/neck was predictive of a positive maneuver (p= 0.0002). The aneurysm exclusion rate at post-operative radiological findings was 100%.

With the limits of this small series, the “squeezing maneuver” appears helpful in the intra-operative detection of misleading ICGV data, mostly when dealing with aneurysms with atheromasic and calcified walls 3).

In selected cases, endoscopic ICG angiographies (e-ICG-A) provides the neurosurgeon with information that cannot be obtained by microscopic ICG angiography (m-ICG-A). E-ICG-A is capable of emerging as a useful adjunct in aneurysm surgery and has the potential to further improve operative results 4).

Indocyanine green (ICG) videoangiography (VA) in cerebral aneurysm surgery allows confirmation of blood flow in parent, branching, and perforating vessels as well as assessment of remnant aneurysm parts after clip application. A retrospective analysis from Two hundred forty-six procedures were performed in 232 patients harboring 295 aneurysms. The patients, whose mean age was 54 years, consisted of 159 women and 73 men. One hundred twenty-four surgeries were performed after subarachnoid hemorrhage, and 122 were performed for incidental aneurysms. Single aneurysms were clipped in 185 patients, and multiple aneurysms were clipped in 47 (mean aneurysm diameter 6.9 mm, range 2-40 mm). No complications associated with ICG-VA occurred. Intraoperative microvascular Doppler ultrasonography was performed before ICG-VA in all patients, and postoperative digital subtraction angiography (DSA) studies were available in 121 patients (52.2%) for retrospective comparative analysis. In 22 (9%) of 246 procedures, the clip position was modified intraoperatively as a consequence of ICG-VA. Stenosis of the parent vessels (16 procedures) or occlusion of the perforators (6 procedures), not detected by micro-Doppler ultrasonography, were the most common problems demonstrated on ICG-VA. In another 11 procedures (4.5%), residual perfusion of the aneurysm was observed and one or more additional clips were applied. Vessel stenosis or a compromised perforating artery occurred independent of aneurysm location and was about equally common in middle cerebral artery and anterior communicating artery aneurysms. In 2 procedures (0.8%), aneurysm puncture revealed residual blood flow within the lesion, which had not been detected by the ICG-VA. In the postoperative DSA studies, unexpected small (< 2 mm) aneurysm neck remnants, which had not been detected on intraoperative ICG-VA, were found in 11 (9.1%) of 121 patients. However, these remnants remained without consequence except in 1 patient with a 6-mm residual aneurysm dome, which was subsequently embolized with coils.

Its a helpful intraoperative tool and led to a significant intraoperative clip modification rate of 15%. However, small, < 2-mm-wide neck remnants and a 6-mm residual aneurysm were missed by intraoperative ICG-VA in up to 10% of patients. Results in this study confirm that DSA is indispensable for postoperative quality assessment in complex aneurysm surgery 5).

The role of indocyanine green video-angiography (ICG-VA) in the resection of vascular malformations has been largely described.