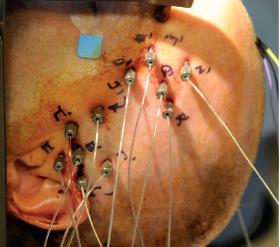 Despite the increasing number of studies reporting results of stereo-electroencephalography (SEEG)-guided radiofrequency-thermocoagulation (SEEG-guided RF-TC) in the treatment of patients with drug-resistant focal epilepsy, the exact efficacy of this approach remains unclear. The seizure-freedom rate varies greatly across studies and the factors associated with efficacy have not been formally investigated.

SEEG-guided RF-TC is a safe procedure with low risk of complications. In contrast, the level of evidence regarding its efficacy remains low. Better identification of factors associated with seizure outcome are needed 2).

From June 2016 to August 2017, twenty-two patients were selected for the present study. They met the criteria of unilateral MTLE-HS after noninvasive evaluation and then underwent implantation of a combination of SEEG electrodes to form a high-density focal stereo-array, including one electrode along the long axis of amygdalohippocampal complex and three orthogonal electrodes to widely sample mesial temporal structures. A unilateral epileptogenic zone of mesial temporal structures was confirmed in these 21 patients. SEEG-guided bipolar coagulations were performed between two contiguous contacts of the same electrode, or between two adjacent contacts of different electrodes.